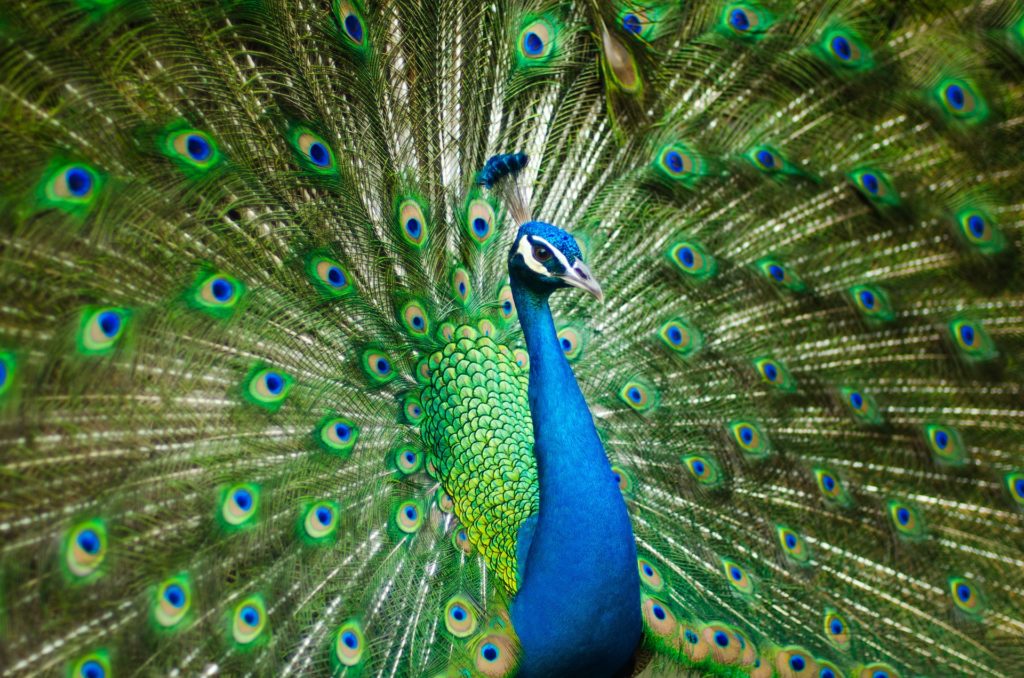 At the time I was Living in Lake Delton, WI. on the lake next to WI. Dells. This happened around 1975/1976? I had just returned home from work on a very hot afternoon. My Mom and someone else was standing in the driveway looking at a full grown Peacock over in the neighbours yard! I instantly wanted to catch it as they told me it had escaped from the Story Book Gardens and the zoo keepers couldn’t catch it. So I ran down our little valley to the lower end of the neighbours cabin as the bird was up on the top. Then I went around the cabin upward where there was a four foot wall holding the dirt back from the cabin and seven steps or so went up to the driveway where the bird was standing.

From right there I was already breathing hard from running all the way around and up to that spot. I slowly peeked around the concrete wall looking up the steps. There he was as all I could see just his long beautiful tail feathers moving at the top of the stairs. Right then I dashed up the steps at him as he let out a LOUD HONK and the chase was on!!!

Holy weed cutting, bush whacking, tree trimming chasing him staying right on his tail feathers as he was was loosing them as I chased him. With feathers going past me we kept going up, down, up and down through the woods!

Back up again and certain that both of us were running out of steam! Down through the woods again when He jumped up to try taking flight again but he could only do eighteen to twenty foot bounds at a time. Well, heading down hill at this point he tried to turn in flight to the right at about six feet off the ground and bottomed out his wings in the Pine branches and that’s when I snatched him out of the tree and rapped my arms around him.

At that point, all of a sudden I saw a vary large beak right in front of my EYE! WOW, he almost pecked my eye out!

Something I will never forget is the look in his eye right when I grabbed him from the tree. I saw the look of death in his eye! He thought I was going to kill him. But no! I just wanted to catch him. POOR GUY!

So I held on to him keeping my head WAY back so he wouldn’t peck my eye’s out and went up to our driveway.

There, my mom called the police. Shortly after a policeman came and as I held on to the bird, I got into his car and he took me to The Story Book Gardens to give it back to the Zoo. Finally I could let go of him as he scolded me as he ran away in the Zoo! Then the owner of the Zoo gave me a fifteen dollar reward for catching him! For a fifteen year old boy that was a lot of money!!!

Then the policeman took me home. When I got there I remembered all the feathers he lost from the wild half mile chase! It took me at least a hour to find all the feathers in the woods and I still have them till this day. I’m pretty sure that peacock stayed home from then on, cause I never saw him again!!!