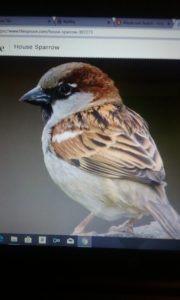 The Sparrow With No Name

This story begins up at a farm I rented high in the Bluffs of Baraboo Wisconsin for 12 years.With a fair sized farm house, a large wooden corn crib, a large wooden chicken coop and some small sheds scattered around the farmyard, with a long gravel driveway in the shape of a Y, and a light pole kind of in the crotch of the Y that lit up the Farm at night. Just an hour before dark I was sitting on my house porch when a bird about the size of a black bird,(I think a warbler), flew out of a large pine tree near me with something in its beak. As it flew across the driveway it dropped the object to the graveled drive near the light pole. Seeing this, I noticed the Bird pecking at the object, so I got up, started to walk over as then it saw me and flew away! When I saw the object, my heart dropped a bit. It was a baby bird of some sort, darn near fresh out of the egg! Eye’s closed, not a hair on its body and as pink as the color can get! Apparently, the Warbler was going to eat the little creature. Well, I did what everyone always say’s, just to let nature take its course and I walked away.

Just before dark, my girlfriend came home. I told Her there was a little baby bird laying in the drive by the light post! She and I walked over to look and there it was, still alive with about eleven or twelve little brown ants crawling on it. We both did what they say, and walked away.

A while later I went out to sit on the porch about two hours after dark. It was a cool night. The farm light lighting up the farmyard, I sat down. Then I got to thinking about that little baby bird, could it still be alive? Sure enough, there laying in the cold gravel with about fifty to sixty little brown ants crawling on it torturing it while it was trying to scrape them off with its hind legs. I got really MAD and Yelled out loud in the barnyard! THAT’S ENOUGH OF THIS!!! And I nieled down with a DEEP breath of air and blasted ALL the ants off of this little baby! Very much to my surprise, the little one felt the blast of my HOT air, put its head up to the sky, opening up its beak to be fed! Totally astounded. I realised, it must have reacted to my winding breath, that one of its parents had arrived because of the their wings! Without any hesitation, I scooped the little one up off the gravel and gathered any and all kinds of bugs I could find. Moths, crickets, sleeping grass hoppers, Anything! Breaking them into small mashed stuff and proceeded to feed the baby Bird.

This became a very tasking project. I had to take this bird with me to my job sites, lunch breaks, coffee shops, back home, everywhere! It got to the point that I could not catch enough bugs! So I started buying stuff from the local bait shops. Spike magites, wax worms, Mayflies! Then, the little one opened its eye’s, and I guess I became Mom or Dad, I’m not sure which. It started growing small feathers and I kept buying bugs. Got funnier cause I had to make a kind of a bed nest on the dashboard of my truck in order to take it with me to my jobsites. SEVEN TIMES A DAY it would call out from my truck to be fed to the point my workers at the job site would have to tell me, HEY! Your bird is screaming in your truck to be fed BOSS! Then came the day I could tell it was a little boy Bird.

I noticed some adult Sparrows that had some Red on their chest, and realised He was a Red Breasted Sparrow! His feathers were getting longer and his demands for food GREATER! Even the bait shop owner thought I must be really catching a lot of fish with all the amounts of bait I was buying!

I had no idea I would be feeding a pig of a Bird! I should have nemed Him, FLYINGPIG!

Well, He started making leaps and bounds across my living room and dinning room. He was making ten to twelve flight bounds across the rooms! So, I took Him outside to get Him ready for releasing into His natural home. There on the porch, I had Him in a large open box, so that He would hear other birds in the yard and get ready to go off on his own. I had NO idea what I was in for. When He started calling out to me for food, I’ll be DARNED! Both the parents came RIPPING OUT OF THE TREES! HEARD THE CRY OF THEIR CHILD!!!!!!!!! Started diving at me!!! Screaming as they dove at me!!! Then (HE) the baby bird got an evil look in His eye, hearing His parents, that I was NOT His parent!!! I FREAKED OUT! I didn’t know what to DO! Didn’t know where the nest was to put Him back, so I through a towel over the box and took Him into the house! After a short time He seemed to have forgotten and then I was still Mom or Dad again. I then realised. They are NOT right about putting an egg or a baby back in the NEST. Those parents new the sound of their BABIES voice even from when its eye’s were closed!!! Even after being taken from their nest. I was astounded. I wish to this day I would have released Him to them that very day.

So, the next day, was one of the worst days of my life. I was feeding Him some Wax worms. Mincing them up like I always did. And one of them was too big, and before I could get it out, His oxygen level dropped to fast and in seconds He died in the palm of my hand.

I cried ALL day with Him in the palm of my hand. Put Him next to My puppy dog in the ground. Then cried for a week, then months and now years, so to tell the true story of; The Sparrow With No Name!

I had forgotten to do the one thing that I am still to this day so very sorry for, I did not give him a name.

I learned many things from that little one. First, to always have a name for something that you love. For isn’t everything and or anything worthy of a name? And to be remembered by a name? Second, if I had been more in tune with His needs, I may not have given Him a worm that was to big. Third, I wish to this day that I would have given Him back to his parents that very day. They not only lost their child one day from the nest, yet to have to loose their child again, when they heard His voice on my porch! Now when I looked back. I should have given them their child back. But I didn’t, and so I learned a very hard lesson from that.

At this point I must add. I could have left Him to be eaten by the ants or that Warbler or to let it pass in a slow death. But instead. He got to open his eye’s. See that that there was life. So to my own comfort. I gave Him more then leaving Him to the graveled driveway of a Farmyard. And keeping Him in my heart still to this day. So let NO one tell you, to just walk away.

So in this day I give him this name!  Flyingpig!

To help support Crystals For Kids you can go to;