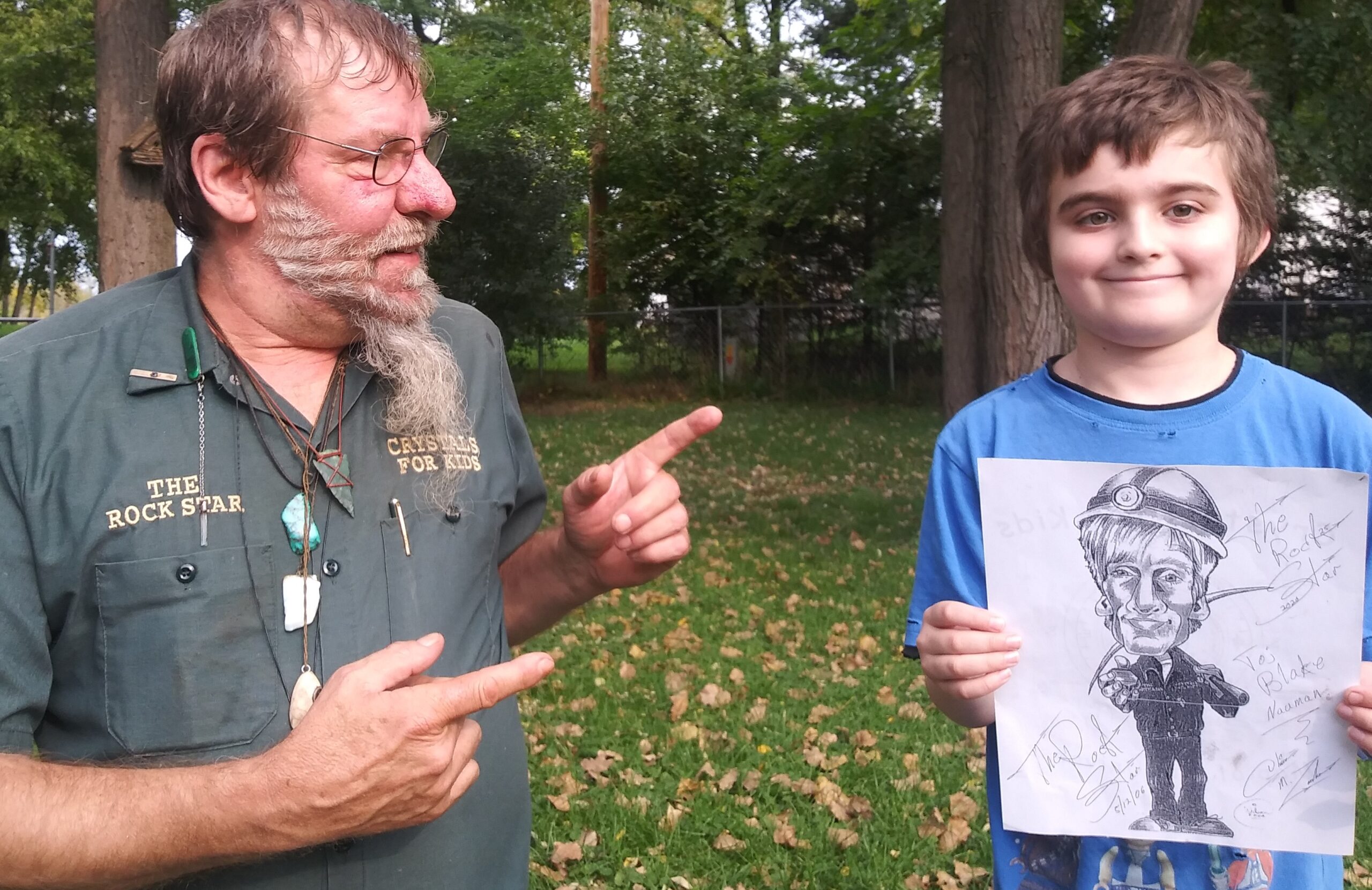 Blake! I think you are another really cool kid. I can see you will also do GREAT things in your life. Keep up the good work Blake! Really glad that Greg Emerson brought us together.

This guy, Jacob, Is one cool little cat. We had a blast talking gems and science. He seems to have a lot more knowledge then when I was 12. He is also building His own website about old coins at, coincollectingforkids.com     As with all kids, I made sure He went home with 50-60 different gems and minerals. This one he’s holding, was donated by a friend, here’s his card as he deals largely. But I tried getting a hold of him but nothing worked. I really just wanted to let Jay know his crystals were still being give to the children. As also, all the other miners that gave, The Rock Star, crystals to give to any kid that came along. So I did! Now I need MORE! 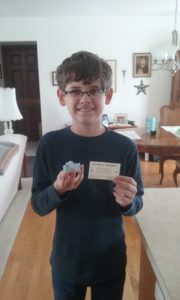 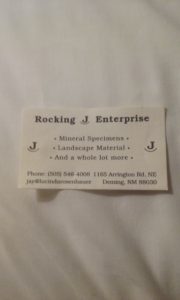 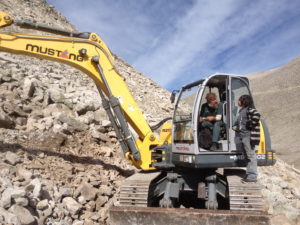 I asked Him for his story! Just received it!

I was around 12 years old and my uncle and I were riding our ATV up Mt.Antero to hunt for the gems of the mountain. I was always fascinated with gems and crystals when I was little . So as we continued up the mountain one day we seen this crazy guy in a huge excavator going up the narrow trail . As he was going up he waved to me and asked what my name was and he told me he is THE Rock Star I was so happy because I knew we clicked right there ,and he invited us the next day to check out his claim and dig with him. So the next day we found his claim and seen him with his huge beard and smile welcoming me to dig . As we were i was finding these really cool smoky quartz but I was looking for the bright and shiny blue stuff the Aquamarines! As the day was getting short I was walking around and found a really nice dark blue Aquamarine. Everyone there was so happy and the rock star was super happy to see me finding this beautiful gem he might have been more happy that me finding it. As of that day he was my best friend And we continued to dig and have a great time. After meeting the rock star he made my passion for gems and crystals increase and now I want to be a geologist . I still think of all the good times we had and I can’t wait to go up there again to dig with him again and make many more great memories! Thanks Adrien!    Here’s The Aqua’s he got! 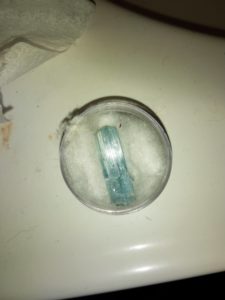 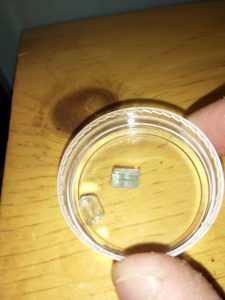 A Stone In One Hand Is A Book In The Other, click HERE!

The Rock Star has  a new walking stick! VIDEO! 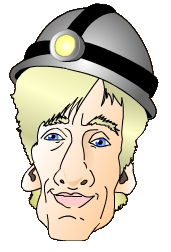 Since 1990, I made a promise in life that if I were granted a load of gems, I would do great things for kids with the mines I discovered and my neighbors joined Crystals For Kids in the same spirit for the children. Since that promise was made, I have located gem sites for the children. The gift of those sites has allowed me, The Rock Star, and His volunteers to give every child the opportunity to return to the earth, to find, to discover, to learn and to cherish the wonders of this planet. We have all scratched the surface when we were small, sticking our hands in the dirt, picking up stones and still do as we grow older. So I thought, why not make use of this tool to captivate the children’s interest. If we can keep their eyes focused on the gifts the earth has to offer, the children won’t have time to find trouble, they’ll find gems instead. One thing I have always said is, “A Stone In One Hand Is A Book In The Other!” Click HERE!

To accomplish this goal, I have performed many presentations at many schools, (See School List button Above), on Science and Gemology.  At every school presentation, The Rock Star, presents around thirty to fifty large raw specimens, with a smaller polished piece next to each of the larger ones.

The Rock Star also gives each child free pickings from seven or eight piles of different gem crystals of different types at the end of each presentation, one from each pile! They practically scale the ceilings to get to the PICKINGS! Funny, eight years after my first school presentation I was walking up to go into a filling station and two sixteen year old’s were sitting there with ice cream of some sort. One of them got up shouting, Your THE ROCK STAR that came to my school when I was young! And I’ll be darned, He reached into His pocket and pulled out one of the awesome clear Quartz crystals that were given to him as well as the rest of the children at his school, Gordon L. Wilson in Baraboo, Wisconsin back then, (126 kids). EIGHT years that child kept that crystal in His pocket! This is the impact I wanted to have with children. Many others email The Rock Star, with thanks for inspiring them when they were young.

Switching gears to watching the children up on the Mountain! Learning as they marvel at their finds! Stories and smiles rapped around the camp fire at camp! Shows the real worth of the gemstones – as precious tools. AGAIN, The Rock Star can see, (A Crystal In One Hand, Is A Book In The Other). Click HERE!

Another goal of Crystals For Kids is establishing camps for troubled kids. Imagine being a child with a theft problem. For example, then someone takes the young person to a soil rich in gems and tells them that they can have all the gems that they can carry. This free’s the child to be honest, no guilt – no shame is involved. No one  looking over their shoulder. No one cares that they put the gem in their pocket. And they are told, if you steal anything from anyone, anywhere! The Rock Star will take this place on the Mountain away from you! So, what would they rather do? Steal that candy bar? Or have this GREAT place on this Mountain loaded with Gems?

With the interest of the children peaked and the involvement of the parents, guardians, volunteers and or much needed sponsor’s! The Rock Star is sure that gems and rocks are so interesting to kids that they can’t resist doing good and picking up a book. The interest gives us the opportunity to teach, guide and share the best of times with our young folks. This is a goal worth working towards. Crystals For Kids needs your help.

It was a child at Gordon L. Wilson School, that gave me the name (The Rock Star), because of all the necklaces I was wearing. A little boy came up to me and my film crew and said “You must be The Rock Star From Space”! That turned into the Mascot and I have kept that name ever since.

Crystals For Kids needs your help Now more than ever. You can go to contacts if you wish to help to continue building a Great place and Greater programs for the children on Mount White, (The Three Sandboxes!).

The Lode of Gems for Kids is on White Mountain, the Claims are at 12,500 feet. The Three Sandboxes for the Children/families, are, Stone Cellar #2, Side Cellar #3 and Side Cellar #8,  Range 7-East, Township-51-North, Section-19, on the New Mexico Meridian, Chaffee County, Colorado. Stones; Aquamarine, Smoky Quartz, Feldspar caps, Smoky Quartz with Aquamarine’s in them, Phenakite and Fluorite and who knows what else gets pulled out of that Mountain next. Only children 18 or younger dig for $Fr.ee. Adults with their kids can make a donation to help support the foundation if they choose.

Now, I have acquired three more claim sites for Kids with my own funds, and looking forward to getting many more families on, (Three Sand Boxes)! You can see a map of them by clicking the different buttons on the upper menu.

To donate and help me to keep this amazing place for the Children please! Click Here! 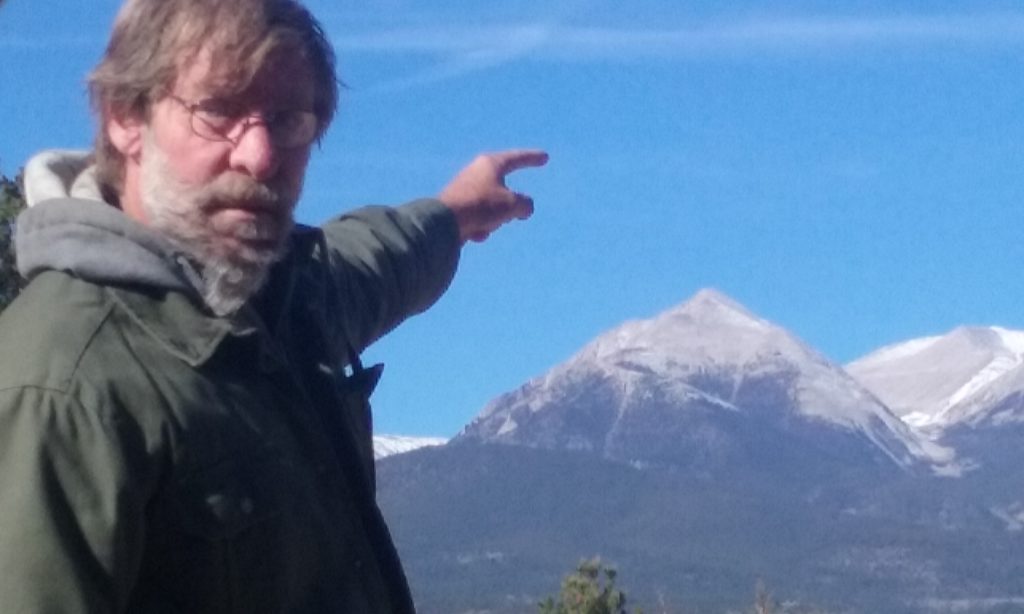