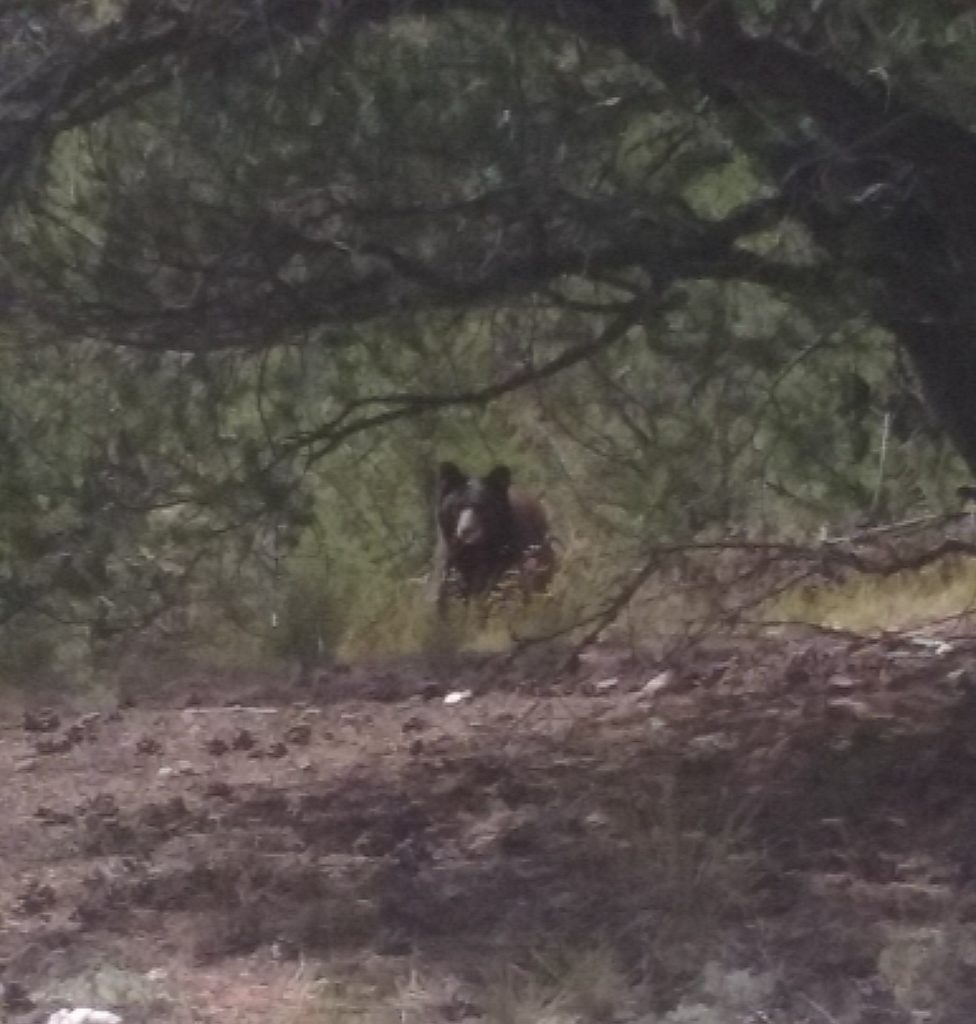 It all started when my last girl friend and I went on a trip in my one ton van to Montana. It was almost dark and had to pick one of the rocky off roads to set-up camp on the north east side of Glacier National Park. Throwing rocks from the heavy duty tires of my big truck,we burned our way up deep into the woods. By the time we got about two miles up the trail ended. It was just a small open area and didn’t even have a camp fire pit. We knew the area had a large population of GRIZZLY bears!!!

At this point, we were already in pitch darkness. We were both worried, so I got out the lantern and the twelve gauge shotgun. I quickly started up the Coleman lantern and placed it up on top of the van. The light would only reach so far out into the dark woods, about forty feet around us.

Then we decided to have something to eat. The problem was that all the coolers and action packers were under the double bed I built. You have to pull out one to get to the other ones. With shotgun in hand she and I pulled out the kitchen packers and coolers. Its not a good idea you know! Food in Grizzly country! But we had to eat, risking getting eaten!!! I watched for bears and she cooked. After we swallowed our food whole, we quickly put everything back under the bed and got in the truck. Sitting in the front seats we locked all the doors, (as if it would matter!) I listened to the radio and she was reading a book. Then about an hour and a half later, maybe two, we decided to go to bed. Lights out.

The van had only five windows. The wind shield, drivers door, passenger door and the two back doors each had one, two foot by two foot window. As my eye’s adjusted to the blackness of the night. I could barely see from star light coming through the back windows. The end of the bed was about a foot and a half from the back doors where our heads were. Laying there with the shotgun pointing to the back. I had the shell chamber a third open so I wouldn’t hit the safety and trigger in my sleep. If you hear something you just close it and shoot! We were both very worn out and fell asleep.

I don’t know what time it was but all of a sudden I woke up feeling the back of the truck LOWERING DOWN ABOUT FIVE INCHES!!! I looked at the back windows and THERE HE WAS! HE WAS LOOKING IN THE WINDOW RIGHT AT ME! I don’t think he could see me but he was two and a half feet in front of me! Instantly my heart started pounding so hard my nipples were jumping. His head was so big it almost filled the one window. I quickly closed the chamber of my gun and had it pointed a foot and a half from his face. Right then he leaned over putting his nose at the seam of the two doors and sucked the air right out of the van! His nose was so powerful you could feel the air moving inside the truck!!! The safety was off and ready to shoot. If he started prying on the door I was ready to BLAST him. Then his head disappeared and the van rose back up the FIVE inches. I couldn’t see were he was and was to scared to get close to any windows. I then went to open a door. JUST KIDDING!!! Heck,no WAY was going to open anything except the tip of that shotgun shell. AMAZINGLY, SHE’S still SLEEPING through all this. I didn’t know what to do except just lay there. I knew he was out there somewhere. Roaming around the van. was he on this side that side or the other? My heart was still pounding rapidly. I waited and waited. She’s now, SNORING! I waited and I waited. I must have laid there for two hours before my heart slowed down. And I waited some more. Finally I figured out he must have left by then and I slowly went to sleep. When we awoke the next morning. There were his dirty paw prints on the back bumper with his wet baseball sized nose print on the seam of the doors.