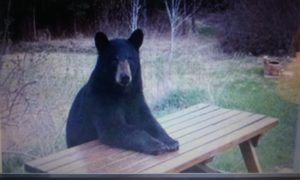 This story starts in Wisconsin were my older brother, his son Jessie, my girl friend Kathy and this year my good friend George are packed and heading for the annual camping trip in Canada.

Ontario here we come! We go there for the clean fish meat and the out outstandingly good wild Blue Berries. You know who loves Blue Berries? Ya, BEARS!!! And we are headed right into the heart of bear country.

Arriving on the shore line of Pelican Pouch Lake, Ontario, we loaded our boats like small barges, three Boats. We had to travel about a mile by water then cross four blocks through the woods to get to the one inland lake we had been to the year before. That meant carrying all our goods across then dragging our boats over.

The rock island was only about ninety feet wide and round with a few trees with some mixed bushes. The island was about seventy feet from shore on the east side of the lake. Though we never had a problem before, it would be an easy swim for a bear. Its a challenge to pitch tents on rock but we quickly set up and went fishing before it got too dark.

Dusk came on fast but up there it never gets pitch dark very often. Time to hit the hay, well, rock!

The next morning we all got up, excited to go fishing, made some food and coffee. There on the main shore line on a little rock point was a full grown Black Bear! Oh No! He was sitting there scratching himself and didn’t seem to care about us being there. This was not a good sign. I didn’t think it was a good idea, but my brother decided to take his boat over to feed him a fish! Getting about fifteen feet from the bear, he could see and most likely smell the fish from there. From his boat he threw the fish and as soon as the fish landed at the bears feet he bolted into the woods without the fish. He must have thought the human came with the fish. We couldn’t see him but you could hear him stomping on the ground and growling in the woods.

Moments later he came out and took the fish into the woods. Well, I don’t know if he ate it all. But he seemed to know who gave it to him! That bugger came back out looking right at us and started coming closer along the shore line as if he was going to swim over to us. Not good!

Earlier when I first saw him I had already grabbed my twelve gauge shotgun. Now I’m not taking my eye’s off of him. He kept pacing back and forth all day over there but didn’t swim across. The longer he hung around the more worried we got.

Now it starting to get dark. He wasn’t out on the shore but we knew he was right there in the woods cause we could hear him making noises. We all knew if we went to bed, that sucker was going to come in our camp. Watching the water with flash lights we were too scared to go to bed. Staying up till three in the morning we finally went to sleep.

Before we went to sleep my brother stacked his coolers and food outside afraid the bear would come into his tent. The thing is, he put the stack in between his tent and the one my friend and I were in! There was only twelve feet between us and the food!

Well, it couldn’t have been more then fifteen minutes after we all got quiet. I heard a noise at the same time my brother heard it. As I went to open my screen window my brother yelled, THERE HE IS!!! I could see the bear right in front of me and he was standing up with his paws on top of the stack!

From that distance, he was HUGE! Right then he lowered his hind legs and shot over the top of the stack so fast that it seemed like he did a disappearing act. I ran out the tent door with my shotgun but couldn’t see him in the bushes. So I aimed at the water and BOOM! Then he shot out of the bushes and dove into the water swimming back to the mainland. Thank goodness.

Well,twenty minutes later that bugger was back at the food and I run him off the island again! Then I could see clearly why he came back. Up on top of the stack was an almost empty package of Peanut Butter cookies. He just had to have more!

I decided to stay up, do some fishing and guard the island so they could get some sleep. That morning he came right out on the same rock point where we first saw him. At that point we knew our problems were not over. So we packed up our boats and left the lake.

The story has more to it after we left. To be continued. Thus the story of the PB Bear.